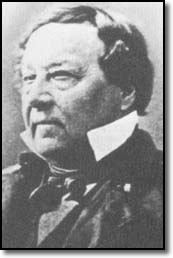 The Bonneville House has a rich past and distinctive place in the history books of our city, state, and nation. This house was built in 1868 and occupied by the David McKibben family for ten years. It was later sold to Mrs. Sue Neis Bonneville, widow of General Benjamin Louis Eulalie de Bonneville (1796-1878), for whom the Bonneville Dam, Bonneville Salt Flats, and our local Bonneville Elementary School were named.

General Bonneville was a French born officer in the United States Army, fur trapper and explorer in the American West. He is noted for his expeditions to the Oregon Country and the Great Basin and for the exploration of portions of the Oregon Trail. He was made famous during his lifetime by an account of his explorations “The Adventure’s of General Bonneville” written by Washington Irving.

In his early career General Bonneville served at the Fort Smith Post in the Arkansas Territory. After the death of his wife and daughter he did not remarry until retiring to Fort Smith after his many years of service. His second wife, Susan Neis, of Fort Smith, bought this house after his death in 1878, and throughout her life preserved the memories, traditions and records of her gallant and distinguished husband. Although General Bonneville never lived in this house, Mrs. Bonneville lived here until her death in 1910, and prior to her death, established herself as a leader and this house as a center of social life in Fort Smith. Many elegant parties and receptions were held at the Bonneville House.

In 1974, the City of Fort Smith established a local ordinance to protect and preserve the architectural integrity of the Belle Grove Historic District. The District, listed on the National Register of Historic Places in 1973, reflects a variety of architectural styles and is the city’s oldest neighborhood. The Bonneville House is located in the Historic District, which covers a 22-block area adjacent to the downtown area in Fort Smith.